Inuit are Indigenous Peoples living in the Arctic regions of Canada, Greenland, Alaska, and Russia.[1] Inuit have lived and thrived in the Arctic for thousands of years. Traditionally they lived off the resources of the land, hunting whales, seals, caribou, fish, and birds, and many Inuit continue to harvest these resources today. Inuit existed prior to contact and Inuit is the accepted term for people who are Indigenous and do not identify as First Nations or Métis.

The Inuit way of life and culture changed when Inuit made contact with European missionaries, whalers, and explorers and later began participating in the fur trade. It changed again between about 1950 and 1970, when the Government of Canada moved many Inuit communities away from their traditional “hunting and gathering” or mobile way of life on the land and into permanent, centralized settlements.

Historically Inuit were referred to as “Eskimos” or “Esquimaux,” but this term is neither accurate nor respectful and should not be used. The word Inuit (singular Inuk) means “the people” in the Inuktitut language.

Where do Inuit live? 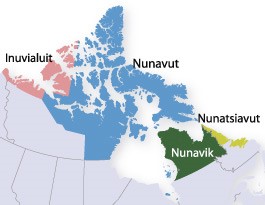 Many Inuit live in 53 communities across the northern regions of Canada, mostly along the Arctic coast, in Inuit Nunangat, which means “the place where Inuit live.” Inuit Nunangat consists of four regions: the Northwest Territories and Yukon (Inuvialuit), Nunavut, Northern Quebec (Nunavik), and the northeastern coast of Newfoundland and Labrador (Nunatsiavut).

How many Inuit are there?

Approximately 65,000 Inuit live in Canada, according to the 2016 Census. The majority live in Nunavut, with smaller numbers in the other three regions of Inuit Nunangat, as well as a small number living in urban centres in southern Canada.

What language do Inuit speak?

Inuit have one language, called Inuktitut. It is spoken in the Northwest Territories, Nunavut, Northern Quebec, and Nunatsiavut (Labrador). Each region has its own dialect.

Do Inuit live on reserves?

Inuit do not live on reserves, but in contemporary communities.

Do Inuit live in igloos?

Inuit do not live in igloos, unless they are sleeping overnight on the land.

Do Inuit have land claims?

Yes, land claim agreements have been signed in all four Inuit regions:

Under their respective land claim agreements, Inuit were granted title to certain blocks of land. These four land claim regions cover about 40 per cent of Canada’s land mass.

Innu are a First Nation in eastern Canada. They are not Inuit.

Inuit have lived on Nunangat (the land, water, and ice) since time immemorial and continue to do so today. Cultural and oral traditions are based on sharing, co-operation, and respect for the land, the animals, fish, and peoples.

Regarded and respected as the knowledge keepers and advisors, Inuit Elders have seen their roles change since contact.

As advisors, Elders ensured that everybody’s voice was heard in decision making to ensure survival. Today, since contact and relocation, Elders now see themselves as the holders and teachers of their language and values, as they only form about 2 per cent of the Inuit population. They also have a voice in research, as they have seen the rapid climatic changes to the land and animals.

Knowledge of the land, importance and continuance of family structures, and rites of passage is just one of the contributions Elders make to maintaining Inuit communities today, using an oral tradition.

Knowledge of the land – sila 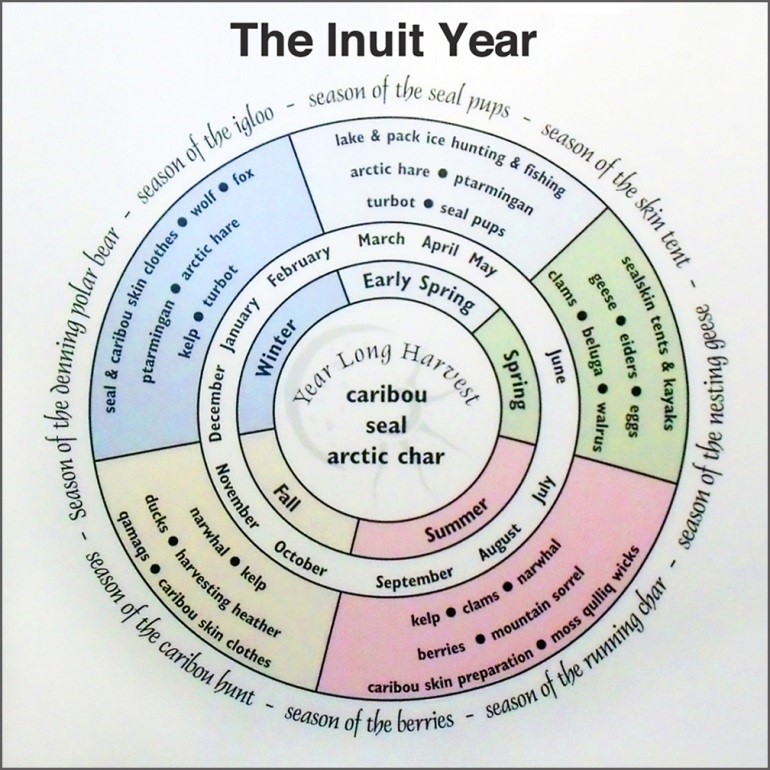 This diagram highlights Inuit knowledge (sila) of the movement of resources and changes to the land and sea. This knowledge is passed on through oral traditions and time spent on the land. With the resettlement of Inuit to different areas of the Arctic in the 1950s, this knowledge was disrupted. Research on and revitalization of knowledge and traditions are ongoing. For instance, the Inuit Quajisarvingat Knowledge Centre took 15 years to relearn the trail systems across Nunangat, from Lake Winnipeg to the tip of Ellesmere Island. The resulting Pan Inuit Trails[3] is an interactive atlas that is a knowledge repository and an assertion of Inuit sovereignty.

There are numerous dialects of Inuktitut, with varying levels of speaker fluency. Dialects are nuances in a language that reflect a specific location and community. Today, each regional governance organization supports language learning in schools and communities to continue the use of the language in everyday life.

There are two styles of Inuktitut writing: syllabics and Roman orthography. Syllabics use symbols to represent sounds rather than letters. Roman orthography uses the English alphabet to sound out the words.

Fig 1.4: Inuit Regions in Canada by Inuit Tapiriit Kanatami is used under a CC BY 1.0 Generic Licence.

Fig 1.5: Inuit Grocery List by Mike Beauregard is used under a CC BY 2.0 Generic Licence.