The Tools of Colonization

In the rest of Section 2, we will look at the ways in which the Europeans colonized the country. The process of colonization and gaining control over the land, now called Canada, was a multifaceted action. We will consider four tools of colonization:

One of the tools was the creation and signing of treaties, which the settlers viewed as a process that transferred title and control of First Nations’ land to non-Indigenous people and governments. These treaties were obtained through unequal negotiations and the purpose, meaning, and long term significance of the signed treaties were understood differently by each signatory body. The British government, and then the Canadian government (after 1867), viewed the treaties as the completion of the transfer and control of land title to the “Crown.” First Nations viewed themselves as equal partners (a Nation) when they signed the treaties, and as such they would still have access to their way of life and their traditional territories for their people, much like two governments working in parallel.

In theory, both parties to a treaty should gain something by signing, and each party also has obligations to the other. However, this was not the case for First Nations. 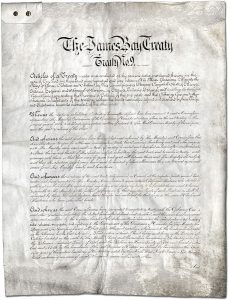 First Nations Peoples entered into these treaties in good faith. They saw them as an alternative to conflict and a way to forge a better relationship. Besides, no one can really “own the land”, so they assumed the land would still be available for their use.

The actual negotiations of the treaties were fraught with trickery, as many First Nations were not fully informed of the real content and meaning of the treaties. They were written in English, which they often could not read, and oral translations were not always accurate. First Nation leaders often had no real way of verifying what they were signing and assumed that the oral agreement surrounding the paper treaty was just as important. An oral agreement is honoured and is often witnessed by others present. These witnesses key task is to then remember and share what they heard in the agreement between parties.

Fig 2.3: James Bay Treaty (Treaty 9) is in the public domain in Canada because its copyright has expired.